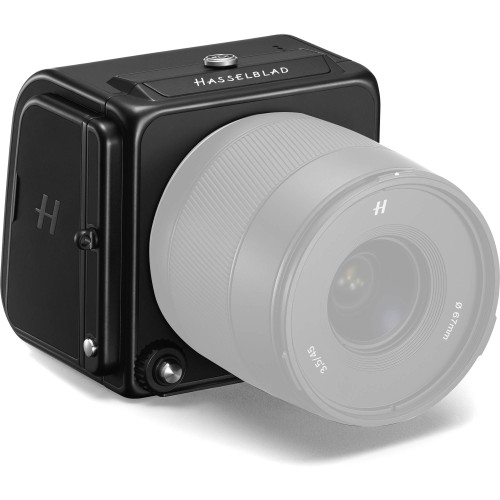 Celebrating the 50th anniversary of the Apollo 11 moon landing on July 20th, 1969, the Hasselblad 907X Special Edition is a highly modular medium format camera system recalling the famous Hasselblad cameras from the historic lunar mission. This limited edition camera comprises the matched CFV II 50C digital back and 907X camera body, both finished in matte black, and the body has been accentuated with the text "On the Moon Since 1969."

The 907X has the distinction of being the smallest medium format camera Hasselblad has ever created, measuring just over an inch thick, as well as the lightest, at 7.3 oz. Recalling the form of the famed 500-series V-system cameras, though, this simple camera body mainly serves as the interface between the V interface of the CFV II 50C digital back and the X-mount for working with XCD lenses or adapted lenses from other mounts.

The CFV II 50C is an updated and refined digital back featuring a classic V-system interface for use on the included 907X as well as virtually any Hasselblad V camera from 1957 onward. Designed with the classic A12 and A16 film backs in mind, this digital back has been outfitted with versatile digital capabilities, revolving around a 43.8 x 32.9mm 50MP CMOS sensor, which yields high-resolution imagery with a wide 14-stop dynamic range, 16-bit color depth, and an ISO 100-25600 sensitivity range. This sensor utilizes Hasselblad's Natural Color Solution, too, which delivers realistic, pleasing color tones for great consistency and smooth tonal transitions. The back's design also incorporates a rear 3.0" 920k-dot tilting touchscreen LCD, to recall the experience of working with a waist-level finder, and it now houses the rechargeable lithium-ion battery internally for a sleeker overall profile. Additionally, built-in Wi-Fi permits wireless remote control and file transferring via Phocus Mobile 2 and an integrated GPS module enables recording location data for geotagging.

Commemorating the 50th anniversary of the Apollo 11 moon landing, this Special Edition of the 907X camera body and CFV II 50C digital back celebrates Hasselblad's involvement in the historic moment and pays homage to their cameras left behind on the moon. Reminiscent of the black finish of two of the three Hasselblad cameras from the Apollo 11 mission, the 907X Special Edition features a distinct matte black finish on both the body and the back, and the CFV II 50C back is also emblazoned with the text "On the Moon Since 1969."

Characterized by its impressively compact, lightweight design, the 907X is Hasselblad's smallest medium format camera body and serves as the inconspicuous interface between the V-system interface CFV II 50C digital back and the range of X-system mirrorless lenses. By providing an X-system lens mount, this opens up the opportunity to pair the CFV II with the autofocus and leaf shutter-enabled XCD lenses, as well as HC, HCD, V, XPan, and other third-party lenses via optional adapters. Use of the 907X also enables greater access to wide-angle lens options, compared to the V system, when using XCD lenses.

Revolving around a large 50MP CMOS sensor, measuring 43.8 x 32.9mm, the CFV II 50C is capable of capturing an extremely wide dynamic range of up to 14 stops along with vivid 16-bit color depth. When combined with the Hasselblad Natural Color Solution, tonal transitions and skin tones show immense depth, detail, and clarity for lifelike image quality, even in dark shadow and bright highlight regions. To suit working in a variety of lighting conditions, a sensitivity range of ISO 100-25600 is available, and still files are saved in the Hasselblad 3FR raw file format or as JPEGs.

Working with the spectacular image quality of the 50MP CMOS sensor, the Hasselblad Natural Color Solution is designed to deliver images with the most natural color without needing to delve into a variety of presets. This system is also capable of creating imagery with exceptionally smooth tonal transitions that are reminiscent of analog film capture, which is thanks in part to the CFV II's 16-bit color depth.

This product hasn't received any reviews yet. Be the first to review this product!